Among many church traditions – particularly among more traditional and liturgical churches – observance of the “Church Calendar” is significant. Like the cycles of the familiar calendar year, the Church Calendar marks the significant “Seasons” of the church.

It begins with the first Sunday in Advent and continues through the fourth. Yes, the Church marks its beginning with the birth of Jesus. Makes sense. The birth is noted and celebrated and then we enter the season known as Epiphany and the six Sundays “After Epiphany” marking the season of the in-breaking of the Kingdom of God among Jews and Gentiles. Epiphany ends, and this year the following Sunday – February 18th – is the first Sunday in Lent.

Lent borrows from the Anglo-Saxon term “lencten” which means Springtime. Lent actually begins on Ash Wednesday – this year that is February 14th which adds up to 46 days. However, since each Sunday during this period is considered a “mini-resurrection Sunday” they are not counted. The result is a 40-day period of days in Lent. Hmmm. Forty days. Jesus in the wilderness forty days.  Noah in the Ark forty days. Forty-day periods are significant throughout Scripture.

Lent is a time of repentance, fasting, and preparation for the coming of the celebration of Palm Sunday, Holy Week, and most significant, the Resurrection of Jesus.  It is a time of self-examination and reflection. In the early church, Lent was a time to prepare new converts for baptism. That continues today in some traditions.

At a personal level, Lent is significant as a special time to focus on one’s relationship with God. It’s a time of practicing spiritual disciplines such as reading through one of the Gospels or other scriptures, meditating on them and applying what is said in them to one’s life. Some have found it helpful to find time for serious reflection by carving out periods for silence or – as will be available at Trinity – utilizing a prayer labyrinth or walking the Stations of the Cross (prevalent within the Catholic tradition). Some find it helpful to “fast” by giving up some particular food or beverage or activity or amusement in order to focus more on Christ. It is also helpful to volunteer and give of oneself for others. There is no “one practice fits all” about this. Lent is a time for drawing near to God in close, intimate relationship.

I love Lent as we move through the weeks closer and closer to the events that unfolded in Jerusalem when Jesus was arrested, tried, put to death, and then triumphed over sin, evil, and death itself.

So, mark your calendar – we are approaching the Season of Lent.  May God bless you in these weeks as we journey together in the great adventure of
​faith in Jesus Christ. 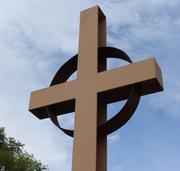 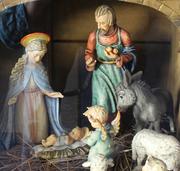 Three years ago, while Connie and I were living in Orange County, thieves broke into a home not far from ours and stole the Christmas presents that were under the tree. One news reporter spoke with the homeowners who described their loss and heartache by commenting, “whoever did this has stolen our Christmas.”

There are many things that threaten to “Steal Christmas” from us that have little to do with stolen presents. Bearing the weight of grief from the loss of a loved one steals the joy of Christmas. Uncertainty about one’s job or finances or ill health steals the peace of Christmas. Threats of war and terrorism, governments that seek to undermine the world’s well-being, environmental threats, and shifts in our culture steal the hope of Christmas.

At the time of Jesus’ birth, joy, peace, and hope were in short supply among the people of Israel. Their joy was obscured by a weight of grief from the oppressive hand of Roman domination. There could be no peace as long as Israel’s enemies thrust uncertainty upon them. The hope of the Messiah’s arrival to liberate God’s people seemed like mere wishful thinking.

Then, in the stillness and quiet of the town of Bethlehem a baby boy was born. In a country gripped by the strongest force on the planet, in a nation where power was measured by military and economic domination, the Creator of all things – all nations, all powers, and all authorities – quietly and humbly took on flesh and blood, and was entrusted to the care of a young rural couple.

But, that baby would disrupt the powers of this world. He would “take back all that was stolen” by the thievery of a fallen world and the scourge of sin and alienation from God. He would be the One to bless the world with joy and peace and hope. And perhaps the very best Christmas present of all is the promise that there is nothing in all of creation that can ever separate us (or steal from us) the love of God revealed by Jesus, the Christ.

Have you seen the movie, Forrest Gump? I have to admit that it’s one of my favorites due to its profound portrayal of the experience of my generation through the tumultuous decades of the 1950’s and onward. In one scene Forrest and his friend, Lieutenant Dan, are in a crowd celebrating on New Year’s Eve. A woman whispers into Forrest’s ear, “don’t you just love New Year’s – you get another chance to start all over again.”

With the New Year comes the opportunity to reflect on the past and to look forward to the future. It is an opportunity to “start all over again” with new goals, new vision for the future, and new commitments.

In recent weeks I have been reading a daily excerpt from the book, Grace Notes, which draws from the writings of Philip Yancey. In the preface Yancey cites that through his writing career his work overwhelmingly focused on three major themes – Jesus, Grace, and Prayer. Arguably, from the standpoint of “starting over again” with new goals and focus, these three would serve us well.

The Jesus I Never Knew is a challenging book in which Yancey strives to see Jesus much more clearly in the pages of the gospels. He finds a Jesus who is very different from the one found in much of the Christian church. He helps us discover the uniqueness, the “untamed nature,” and the impassioned grace of Jesus.

Speaking of grace, the U2 lead singer, Bono, is right when he says “grace is the great concept that Christianity has introduced to the world… and it has changed the world forever.” Yancey offers a grand exploration of “Grace” and its impact in his book, What’s So Amazing about Grace?  More than ever, followers of Jesus need to be people of grace. This book can help us become such people.

Finally, in his book, Prayer: Does it Really Make a Difference?  Yancey forthrightly and honestly deals with the questions and struggles we all have about prayer. I have found this to be one of the best books on the subject.

How about this for a goal this year:  find one, or two, or three other people who will commit to reading and discussing these three books with you? I can’t think of a much better way to “start over again” in your experience of the richness of Jesus and of God’s grace, and of the gift of prayer.